Over the next few weeks I will be working with chalk paint alot. That is not the same as chalkboard paint although you can write on it with chalk. Chalk paint has been around a long time but has recently regained a popularity among decorative painters. It can be used on walls with some effort but it is mainly used on furniture. Why? You may ask. Well, it has excellent adhesion. So much so that you do not have to prime. It dries faster and sands more easily for sanding or making a chippy painted piece.

Now, you can go out and buy ready made chalk paint. And if you do so I highly recommend Anne Sloan products. It can be quite costly if you are doing a large piece or a number of pieces such as I am doing. Beside, I, of course, just want to make up my own.

There are a number of kinds of recipes for chalk paint. I am going to be working with two. The first one is made with Plaster of Paris which can be bought at Home Depot. It is quite economical and goes a long way. The other is Calcium Carbonate which is not that easy to come by. I ended up ordering it from Amazon.com. I have heard of people getting it through there health food store which I will be looking into and maybe will know that little tidbit by the time I get to that kind of recipe. Getting ahead of myself a bit here. The cal carbonate won’t be in until next week and seeing as I have a deadline and am just itchy to get started I am going forward with the Plaster of Paris recipe. 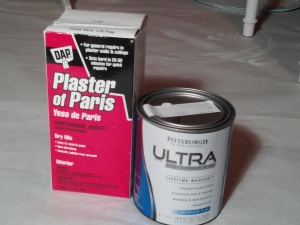 This recipe usually comes in second to calciumn carbonate one because it doesn’t always want to mix well supposedly and doesn’t keep its’ consistancy overnight at times. I will say, however, I had no problem getting it to mix to a smooth consistancy. I’m starting with the smaller piece just to get my hands dirty, so to speak. Remember the piece with the Christmas tree on it? It is perfect for a starting point and I know exactly what I want to do with it to transform it. The other pieces I am still playing with colors for them. 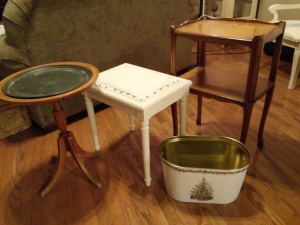 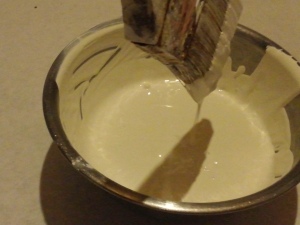 The recipe for this one is::
Plaster of Paris Chalk Paint

Mix the PoP according to directions until it is a smooth contistancy.
Stir into the paint slowly. Combine until it is well mixed. You will know.
They say it should be the consistancy of pancake batter. Mine didn’t come out quite that soupy and tomorrow I will find out if that makes that much of a diffeerence.
Also, it is recommended not to use paint with a primer already in it. I didn’t know this tidbit until I had already purchased some of the paint. Again, supposedly it dries too fast using a paint with a primer in it. Personally I had no problem with it. 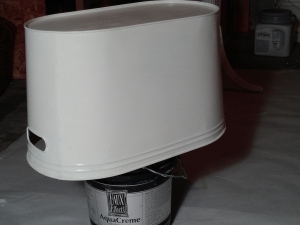 I put two coats on and am letting it dry overnight before moving on to the next step.
Doris